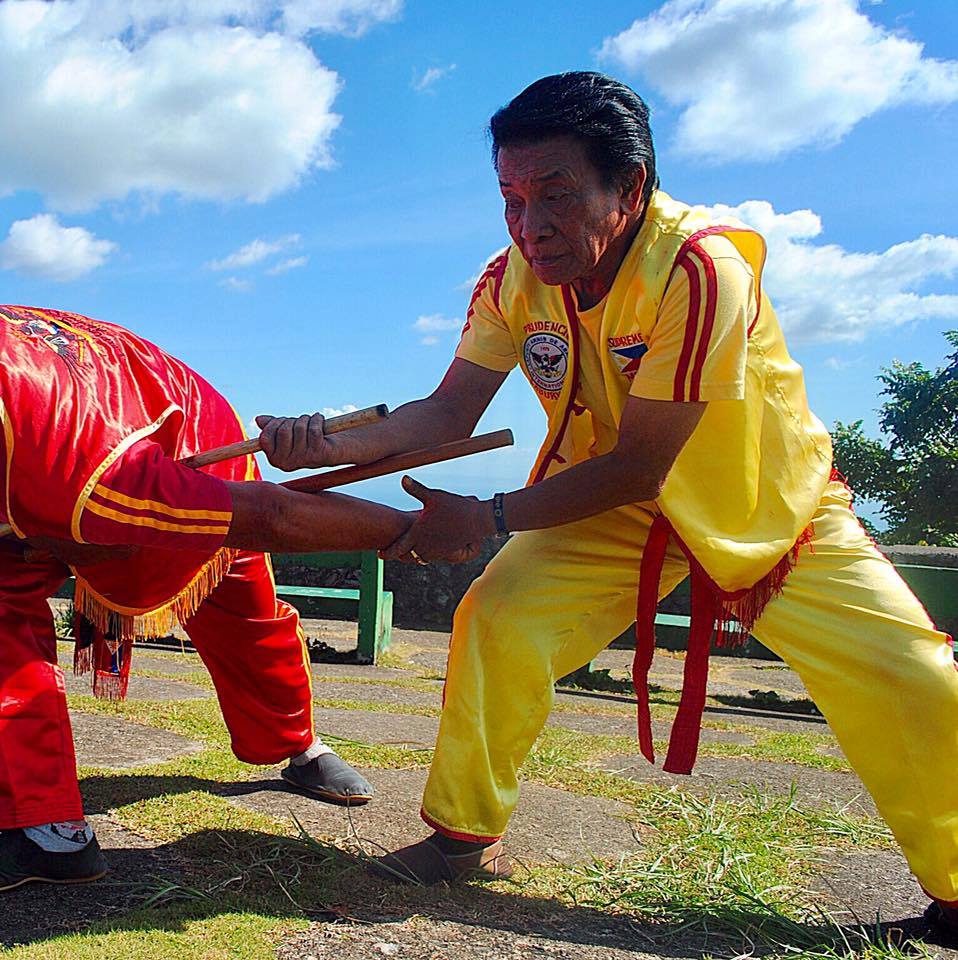 In 1927 at the age of 12 his brother Felimon “Mooney” Caburnay (b1915-d1991) began to learn the arts of blacksmithing and traveled the Visayas and Mindinao with his brother. Felimon now learnt many different fighting styles of Arnis/Escrima from both Seniong and from the people they met.

The Caburnays’ base before WW2 was in southern Cebu City and a group comprising Seniong, Filemon, Juan Abella, Antonio Alingasan, Concordio Encabo, Ramon Fernandez and Lauriano Sanchez practiced their martial arts within their small circle. This circle of friends decided to call their style “Arnis de Abanico” or “Arnis Fan Stick style”.

In 1957 Master Filemon was invited to the Cebu Doce Pares school/club both as a teacher to others but also as the sparring partner of Master Filemon Canete.

His love of martial arts and his desire to learn led to his meeting and later collaboration with the Filipino-Chinese Kung Fu Master John Chiuten.

Evasion techniques, locks and takedown moves learned from other masters were also incorporated in Master Filemon’s fighting and teaching style.

Prudencio “Undo” or “Ondo” Caburnay (b-April 28th, 1943) the son of Filemon Caburnay, the heir and current Grandmaster of the style, began his training in 1960 in the Arnis de Abanico circle.

Undo during the 60’s, began to research, develop and modified his own style within the Arnis de Abanico group. He states “My father designed the abanico style to fight bigger men, so being small myself I had to make do and improvise for my lack of size”.

Undo stands 5 foot 2 inches. It was during this time that Undo began to perfect the union of all the styles taught to him by his father and friends.

Master Filemon found that he was frustrated within the confines of the Doce Pares especially with regards to tournaments and tournament rules. So he decided to break his links with the Doce Pares and fully teach his style to the public under his old styles name.

In December the 30th 1972 Filemon and Prudencio officially founded the school “Lapunti Arnis de Abanico”. The styles/schools name “Lapunti” comes from the 3 surrounding barangays or barrios of their base in southern Cebu City where the Caburnays lived.

These were Labangon, Punta Princessa and Tisa barangays.

The school, since 1987, goes by the formal name of: “Lapunti Arnis de Abanico International”.

Undo during his life has been a Cebu City health officer, a mining employee at the Atlas mines and spent several years as a bouncer at a local beer hall. He is now a Barangay councilor at Barangay Tisa, often putting his life on the line as a local “Tanud” or policeman.