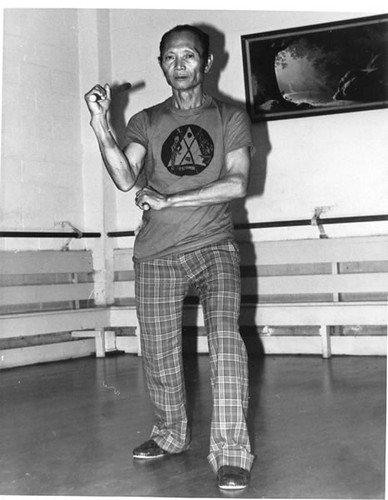 Born in the Philippines in 1917, Cabales moved to the United States in the late part of 1939. He is acknowledged as the Father of Eskrima in the United States. Angel Cabales was the first to open a school (Stockton, CA) that taught the art of Eskrima to both Filipino and non-Filipino students.

Cabales met a man named Feliscimo Dizon on the docks of Manila. Dizon taught Cabales the stick fighting skills. They trained together on a daily basis with a round kamagong, dagger and empty-hands. Cabales trained hard and became fluent in the many aspects of the system.

Through many traveling experiences he made his home in Stockton, CA. In 1966 he decided to teach the Serrada art to the general public. He always enjoyed sharing his many stick-fighting adventures through his rough life in the Philippines and United States.

He is greatly missed in the martial art community and will always be remembered as one of the greatest Grandmasters of the Filipino Martial Arts.

Serrada Escrima is the fighting system and teaching methodology developed and used by the late Grandmaster Angel Cabales. Angel Cabales was the only known heir of Grandmaster Felisimo Dizon. The Serrada system was developed to produce competent escrimadors in 6 months to a year and master level practitioners in as little as three years.

Serrada is first taught as a stickfighting art but at it’s core it is a bladed system. Serrada also has an extensive empty hand curriculum and has a highly developed system of Espada y Daga or Blade and Dagger concepts.

The system is taught with a short stick in comparison to most other Filipino Martial Arts. A common way to measure the weapon length in Serrada is to check the distance from the arm pit to the wrist or mid-hand.

While known as a corto or close range system, Serrada is also commonly seen practiced at the medio range. This is where the practitioner can hit their opponents body with the primary weapon and still remain out of range for the secondary weapon with out a change in footwork.

Serrada also uses a medium frame work; practitioners are usually found forward weighted in what is commonly called the 60/40 stance. Serrada practitioners use this framework to easily load weight into either leg. This allows practioners to either ground their power when hitting or blocking, or to spring out when moving.

From a historical context Serrada is a sister art to Kali Ilustrisimo, the Villabrille-Largusa System of Kali, and Doblete Rapilon Arnis. Of the four systems Serrada is known for specializing at the corto or close range.

The empty hand techniques of Serrada have often been compared to Wing Chun, but with a more mobile footwork and frame. Serrada also shares similarities with some of the standing techniques of Sera-Serak Silat and Hsing-I Chuan.

The beauty of system is in it’s teaching and training structures. Serrada has a systematic progression that allow a new students to quickly, safely, and confidently move from novice to competent practitioner.

The system also has intense and rigorous structures for those who are committed to bringing their practice and skills to a level of mastery.